In the last two decades, we have seen entrepreneurs, and leaders of established organisations make waves because they wrought lasting change in difficult times. During the same period, we have seen many MNCs, large enterprises, SMEs and start-ups struggle to find the right successor to power organisations to the next level. We have also witnessed many people who were at the helm of successful companies, pass the baton to their successors, and mentor them. They decided to let a successor lead the organisation they built, only to return in a short while. Why did they return?

What does this tell us? Did we not have the right talent within organisations? Talent that can perform at the same level or better than the leaders who decided to move on? Is there a challenge we are facing in leaders’ ability to groom and anoint successors who are better than them, or at least as good as them? Why then, are they coming back? This phenomenon merits a closer look; a probe into latent organizational dynamics that cause the rupture.

Succession planning and identifying top talent in organisations has been in vogue for many years. Most organisations claim to have a clear succession plan. Then why are successors not successful or even identified?  Is it a problem of not really having the right leaders to take the organisation to the next level? Or is it one of identifying and handing over the reins to the wrong person?

This situation is attributed to critical behaviours demonstrated by leaders –leading them into three traps at different maturity stages of the organisations they lead.

1 The first, “Style” Trap. To move from start-up mode to success mode, requires a very different set of behaviours that leaders need to imbibe and demonstrate. This is common in start-ups. For start-ups to be successful, the leader is normally involved in every aspect of strategy and execution. The strategy and vision come from one person – the leader, and this needs to be executed. The executing team is hired. The leader expects the team to do exactly what he or she envisages and specifies the way it should be executed. Most start-ups have a core team which is usually working together from inception. The core team is not involved in all discussions and is left with instructions that are carried out without relevance or context. What was visualised by the leader needs to be achieved. In most cases, it is achieved.

Now comes the trap. “Known Competencies” versus “Unfamiliar Landscapes”. The organisation must move to the next level. The capabilities required are different because the territory is unfamiliar. The leader is now responding to this unfamiliar territory; but working with the same maladaptive style. 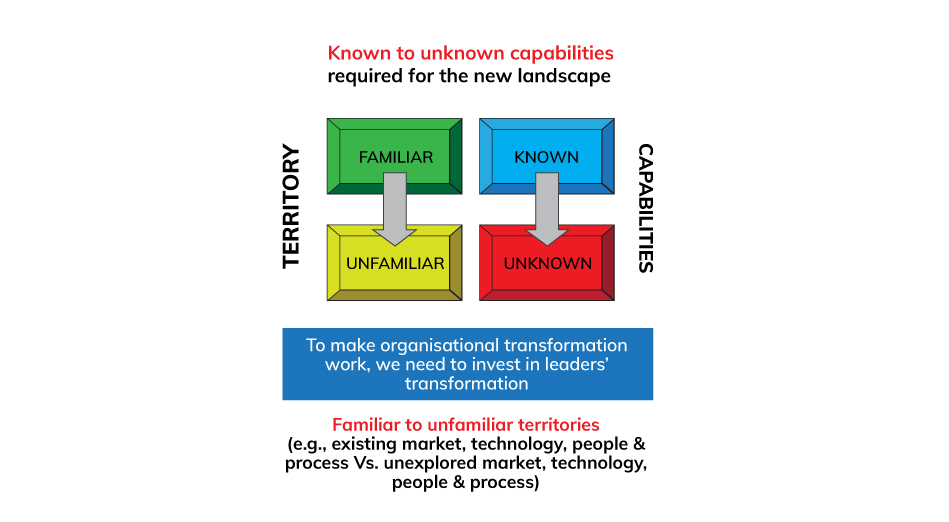 This is the trap many successful organizations fall into. The core team mirrors the leader’s style because the leader is now a legend! Legends are looked up to, revered, and unconditionally trusted. Soon, you have a group who has blinkered tunnel vision because they are convinced that the leader will take the organisation to the next level; just as he or she did; during the start-up mode. The leaders have now fallen into the “style trap”.

2 The second, “Success” Trap. Leaders start believing in their own hubris, their infallibility. This causes them to behave in entrenched, hidebound ways, and reject new ideas. Fewer innovative ideas are mooted to keep the organisation on the growth trajectory. The bigger challenge with the success trap is that successful leaders are unable or unwilling to transfer their skills and knowledge. The concept of teachable point of view, so beautifully explained in Noel Tichy’s book Leadership Engine, suffers when leaders are unable to transfer the key attributes that made them successful. More importantly, they are unable to let go. While there is much focus and talk about “Learnability” and “learning organisations”, they cannot exist or become a manifest reality without “teachability”. You need two hands to clap!

In a highly successful organization, sales managers once accompanied their ambitious sales teams to the market, teaching them on the job, in the field; sharing practical information on the dos and don’ts in the market, allowing mistakes to be made. This attention to hands-on mentoring made the sales team exceptional. This is a great example of teachability by those managers. This was extremely effective. However, it stopped there and was not institutionalized as a best practise. It did not spread further up the hierarchy.

On the contrary, in many nascent organizations, the leader is visible in all operational meetings, taking all manner of operational decisions. The rest of the organisation then shies away from ownership. “He/she will take the decision, why bother?” The organization’s work ethic is driven by the CEO’s working style and is not centred around organically evolved best practices. The wag the dog operational ethic is enshrined in diktats such as “The CEO wants this report by day’s end.”

The leader now is doing the work that is two or three notches below his or her capability. The team becomes reactive, and not proactive. No one is focusing on organisational growth but are lobbying for the leaders’ appreciation – the nod, the smile, the validation. Everyone in the organisation now works around these emotions and behaviours.

The biggest stumbling block of leaders who are in the success trap is that they are praised and respected by their own people. Respect morphs into adoration quickly. Adoration becomes reverence. Unknowingly, the revered leader succumbs to this belief. The belief seeps in so much that the leader becomes convinced that the organisation will collapse if he or she does not participate in all decisions.

When the leader realises this, is when the succession plan and assessment of leadership potential occupies the CEO’s mind space.
Is it too late? Are these assessments taken seriously? Have we found the next leader? Has the CEO built leaders? Isn’t the organisation bigger than the individual? All leaders must reckon with these questions and formulate their own answers to these.

3 The third, “invincibility” trap. Success begets success, but not when one continues to function in a moribund, change-averse manner. To move to the next level, the leader must look at sustainable growth, sustainable achievements, and a sustainable organisation.

The success trap leads them to believe they are invincible. ‘’If I built the company from scratch, I can take it to the next level’’. This becomes a Pyrrhic victory. Leaders struggle to translate their vision into achievable roadmaps that their teams can believe in. The journey of sustainability now must be undertaken alone; unless the leader believes sustainability can be achieved, only by hand-picking and grooming the next level of leaders working closely with them. The teachability we spoke about earlier; must kick in now.

Letting go should happen only when the leader is convinced that the successors chosen are the right fit, and not the best. When to let go and how to let go, is part of breaking out of the invincibility trap. Invincibility and letting go, are two poles apart!!

There are three ways to break the Leadership Trap barriers. They are the. 3 Es that leaders need to practice; irrespective of the trap one is in.

Empower the next level – The key behaviour for inculcating this mind-set is “to let go”. There is a time to hold on fast and a time to let go. Letting go does not mean staying away. It involves clearly communicating through your actions; that you are available and approachable for advice and suggestions; that you do not expect the next level to follow the same style that you followed; or expect the same outcomes that you expected. A big part of letting go is to allow for mistakes and mis-judgments to happen; and mentor the next level to win in their own way.

Educate – As pointed out in the preceding paragraph, teachability is a very important disposition expected form the leader. Teachability is the ability to reach out and share perspectives from your own experience and success stories. It’s the disposition that you as a leader demonstrate by being available and sharing those perspectives that will help successors think about pitfalls or embrace new thought processes. Educating with what is called a “detached attachment” is the key to demonstrating this behaviour.

Leaders must be wary of these three traps. This will enable an organic fostering of talent and leadership. In conclusion, “One of the competencies that leaders need to focus on, is building more leaders. Successfully steering the organisation to a certain height is only one part of the story. Leaders who do not build future leaders cannot build great organisations.”

About
Our Solutions
Resources
Contact Us
Privacy Statement
Terms of Use
We use cookies to ensure that we give you the best experience on our website. If you continue to use this site we will assume that you are happy with it.Accept